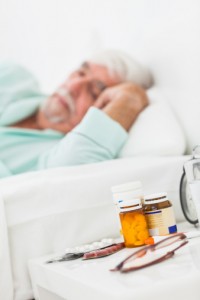 As the population grows older, issues surrounding care of the elderly have become more prevalent. Many experts worry, for example, about the extent to which nursing home patients are prescribed antipsychotic drugs.

Recent studies show that as many as one in four nursing home patients are prescribed an antipsychotic drug. According to the American Society of Consultant Pharmacists, antipsychotic drugs are typically used to treat “schizophrenia, psychotic symptoms such as delusions and hallucinations, and [behavioral and psychological symptoms of dementia] in certain situations.”

The concern is that antipsychotics are prescribed far too often as a way to get dementia patients to “calm down” when they become agitated or to prevent agitation or emotional outbursts. Not only are antipsychotics over-prescribed but they are also frequently prescribed in dosages that are too high, according to research studies conducted by the Centers for Medicare and Medicaid Services.

In 2010, the agency determined that 17 percent of nursing home patients were receiving a daily dose that was above the recommended level. These concerns led to the launch of the National Partnership to Improve Dementia Care in 2012. The goal of the initiative was to reduce the use of antipsychotic drugs by 15 percent by the end of 2013. Though partnership did not meet its deadline, it continues to pursue this goal.

Why Are Antipsychotics Overused?

One reason that these drugs are commonly prescribed to nursing home patients is that they are a quick fix to a complex problem. Patients who have an age-related dementia disease such as Alzheimer’s can become disoriented, which can make them agitated or hostile.

However, no medication has been approved to treat behavioral and psychological symptoms of dementia. Therefore, healthcare providers may turn to off-label use of drugs such as antipsychotics. The term “off-label” refers to a situation in which a drug is prescribed to treat something for which the FDA has not officially approved its use.

In response to this, the American Society of Consultant Pharmacists has released an official position on the use of anti-psychotic medications in nursing homes. The organization acknowledges that in some cases antipsychotics can be warranted. However, they should only be used when the following guidelines apply: