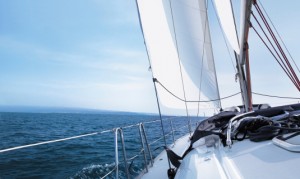 A Washington State ferry crashed into a sailboat in the San Juan Islands recently, causing the sailboat to sink. According to news reports, the collision occurred between Orcas and Shaw Islands.

A passenger on the ferry said neither vessel sounded a horn as they approached. The ferry tried and failed to avoid the collision by turning away at the last moment. The ferry then launched a rescue boat, which pulled the lone occupant of the sailboat off the vessel. The sailor appeared unharmed but dazed. The sailboat sank completely within half an hour.

“It looked like negligence on two sides,”  the San Juans captain said. “The boat captain in the sailboat, who was apparently below deck under power, and the ferry captain who completely did not see it.”

Washington State has the largest ferry system in the United States, with 22 full-time vessels. The ferry system provides service to eight counties in Washington as well as British Columbia in Canada.

Ferries take passengers between mainland Washington and various islands located off the coast. Passengers count on the experience and skill of ferry captains to deliver them safely to their destination.

Thankfully, no one was seriously injured in the recent collision. However, the crash illustrates just how quickly a collision can sink a boat and potentially strand passengers in dangerous waters.

As fall approaches and water temperature drops, the risks associated with capsizing increase dramatically. The crash reminds all of us about the importance of safety while navigating the waterways in and around the State of Washington.

If you have been injured or lost a loved one in a Yakima Valley boating accident, you could be entitled to compensation for your injuries or your loss. The Yakima Valley accident attorneys at Mariano Morales Law can help you get through the legal process and make sure that the party responsible for your injuries or loss is held accountable. Contact the team today by calling 866-972-0493 or by using our online contact form for your free initial consultation.