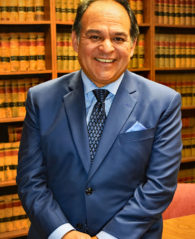 The son of migrant workers who settled in the valley, Morales remembers the embarrassment of being sent to special-education class when he started school because he didn’t speak English and because bilingual education requirements did not yet exist. But he persevered, learned the language, and did more than make it through school. He went on to achieve a law degree while working full time, start his own practice, and gain recognition as one of the top plaintiff’s attorneys in Washington.  He was voted The Best Attorney in the Yakima Valley in 2004, 2005, 2007, 2008, 2009, 2012 and One of the Best in 2006, 2010 and 2011.

It’s a tale of hard work and perseverance. But it’s also a reflection of his deep commitment to Yakima Valley and its people.

After graduating from Grandview High School in 1976, Morales attended the University of Washington, then earned a bachelor’s degree in forest management from Washington State University in 1982. He worked his college summers for the U.S. Forest Service, including membership on elite “hotshot” firefighting crews. He developed an interest in resource policy and one day spotted an ad in the Journal of Forestry for an entry-level position with the Society of American Foresters’ national office in the Washington, D.C., area. He applied, got the job, and then spent six extremely busy years in the nation’s capital combining his work for SAF with post-graduate work in political science at George Washington University and night classes at Catholic University’s Columbus School of Law. Morales also law clerked in several D.C. law firms. He was driven to succeed.

Morales intended to stay in the nation’s capital and pursue his interest in natural resource policy, but a respected peer recommended that he return to the “hinterlands” to remember what it was like in everyday America before returning to D.C. So he returned to Washington State and quickly landed a job in a large corporate firm in Spokane. Corporate law was not to his liking, however, so after a year he took a job back at the Forest Service, working in the agency’s Portland, Ore., office revising the region’s national forest plans; it was there that he made one of the most important decisions of his life.

“I came to appreciate being close to my family, the beauty of the Northwest and the everyday simple life here,” he says. “I decided that this is where I belong.”

He also knew that he wanted to develop his legal career in new ways, by getting into court and trying cases. So he got a job as a prosecutor in Yakima and gained valuable courtroom experience before moving to a personal injury firm, where he became the firm’s trial lawyer. After a few years, in 1994 Morales pursued the dream of striking out on his own and launched his firm.

Morales’ practice today focuses solely on representing people who have been injured or harmed when someone else is at fault. Along the way, he’s handled numerous high-profile cases that have netted clients highly favorable outcomes.

In one of them, known as the “30-Mile Fire Case,” Morales represented the families of two young women who were among six firefighters who were burned and killed during a large forest fire in central Washington. Relying on his own experience as a firefighter, Morales saw that the fire shelter in which the victims died had been improperly deployed due to faulty instructions. A three-year legal battle against 10 manufacturers ended in a confidential settlement holding the companies accountable.

In another landmark case, Morales represented the mother of a five-year-old who had been killed in a school bus loading zone and took the case all the way to a jury trial, arguing that the zone was operated in an unsafe manner. The jury agreed, returning a $1.8 million verdict for his client. The school district still refused to accept accountability and appealed the case all the way to the state Supreme Court. Undeterred, Morales fought them every step of the way, and the verdict was upheld.

More important than the personal victories for himself and his clients, however, Morales takes particular satisfaction when his efforts make the world safer. He notes that the faulty deployment instructions for fire shelters have been corrected and that laws for school loading zones have been improved.

He also takes satisfaction as a role model for young Hispanics in Yakima Valley.

“When I left this valley, there were no Hispanic lawyers and no role models to follow. One of the things that drove me to return here was that I felt that Hispanics in this valley needed to see a success story—one of their own growing up and becoming a lawyer and being good at it.”

Morales’ stature as a plaintiff’s attorney has been borne out by his selection by readers of the Yakima Valley Business Times as the best attorney in the valley for five years.

Morales describes his life as ideal. He’s living and raising a family in an area he loves. And he’s doing a job that he relishes because he makes a difference in people’s lives.

“The practice of law is not a career; it’s a way of life. In my case it allows me to fight for ideals and values that are a part of me — fairness, truth and justice.”

“I get a lot of satisfaction from my work because 99 percent of the people leave my office with more than what they arrived with,” he says. “I also feel good about the fact that when I help them with a case, my pay is coming from an insurance company. It’s not coming directly out of their wallet.”