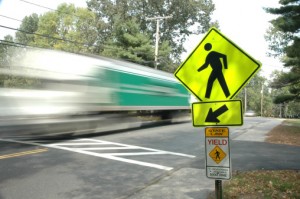 Whether you enjoy walking as a form of exercise or you walk for more pragmatic reasons, such as to get from point A to point B, it should not be considered a dangerous activity. Sadly, however, pedestrian traffic accidents are on the rise across the nation, and Washington State is no exception.

A fatal pedestrian crash occurs approximately once every two hours across the nation, according to figures released by the Centers for Disease Control and Prevention. CDC statistics also reveal that, on average, eight pedestrians are injured each hour in pedestrian traffic crashes. In 2010 alone, 4,280 pedestrians were killed in traffic accidents, and another 70,000 were injured. In Washington State, 64 pedestrians were fatally injured in traffic accidents during 2011, which represented an increase of three deaths from the previous year.

People Most at Risk of a Pedestrian Traffic Accident

More people are walking than just a decade ago. The increase in pedestrian traffic is due, in large part, to an emphasis on both the environment and health. Some environmentally conscious individuals choose to walk or ride a bicycle whenever practical. Health-conscious Washington residents often take to the streets for an evening stroll as a way to stay in shape while enjoying the state’s beautiful scenery. Many other people walk because it is the most practical way for them to get where they are going.

Unfortunately, all pedestrians are at risk of becoming the victim of a traffic collision.

However, there are some factors and characteristics that increase the risk, including:

The laws in Washington are fairly straightforward and pedestrian-friendly.

Some of the more important pedestrian laws include:

If the motorist was entirely, or even just partially, at fault for the accident, then the pedestrian victim (or surviving family members in the event of a fatal accident) may be entitled to compensation for the injuries caused in the collision.

Hit by a Car While Walking? Call Our Yakima Pedestrian Accident Lawyers Today

If you or a loved one has been injured in a pedestrian traffic accident in Washington State, contact the Yakima personal injury attorneys at the Mariano Morales Law Firm for a free initial consultation. Call us now at (509) 972-0493 or fill out our online contact form. If we handle your case, we receive payment only if we obtain a settlement or verdict for you.